Biomes are the different environments you can encounter in the TerraTech world. Each one has different features, including resources specific to them. There are currently 6 biomes you can find as of stable version 1.4.3, though more are planned to be added in the future. 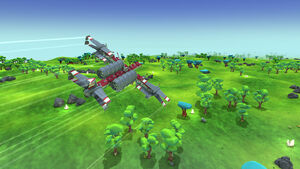 Grasslands are home to grassy rolling hills, average amounts of resources, and lots of trees. This is also the type of biome that you start your journey in, and where many of the early GSO missions are set in.

The most common enemy techs here are GSO techs, similar to those you would find in the early missions. Invaders cannot be directly spawned in the Grasslands.

Due to the abundance of trees in these biomes, these can be a great place for getting energy once you have a furnace generator. They can also be a good place for getting resources, though they don't have as many as the mountainous regions. Erudite is exclusive to these biomes. Since Erudite is the most expensive mineral in the game, setting up Auto Miners/Delivery Cannons combos in the Grasslands can be a good early money boost.

This variation consists of large fields with rolling hills and small clumps of trees.

This variation has steep rocky ridges with grass tops and more treacherous terrain than the regular Grasslands. However, rocks are common and plumbite and titanite is plentiful here. The grass is tinted slightly grey as well.

This area contains rolling grassy hills with a wide flat valley below. Medium to large patches of trees and rocks are streaked across the landscape. This is less of a proper biome variation and more like a little area within. 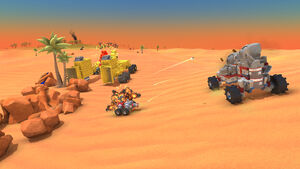 Deserts are barren stretches of sand, featuring few trees and resources. They are a bit flatter than grasslands, making them pretty good for travel and making bases. Of course, they aren't as flat as the Salt Flats.

When it comes to resources, deserts can be pretty empty. You will see stray palms and groups of rocks occasionally, but not as much as grasslands, and not nearly as much as mountains. However, you can find a very dense patch of resources similar to the mountain biome. Because Ignite and Oleite are almost exclusively found there, it provides a good fuel source (Oleite) and a good money source (Ignite, which is the 3rd most expensive mineral in the game).

With slightly steeper hills than the regular Desert, the naturally formed dips and ramps are the perfect place to use Venture techs and not for the best place for making a base.

This desert contains small sand dunes in a ripple pattern.

As the name suggests, this variation contains many flat-topped plateaus of varying size. The ground around and on the top of the plateaus is relatively smooth and a good place for a stationary base. 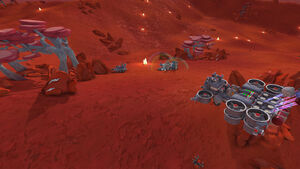 Mountain biomes are very steep, requiring techs with good ground clearance to get through. They are also full of resources, so it can be worth the risk. And since they are so treacherous, many enemy techs stay away from their steep cliffs, so the mountains can be pretty quiet.

Again, resources are plentiful here, making this a great place for mining, containing multiple dense patches of rock like the desert. Mountains are the only place that Rodite can be found, a common crafting material for mid to late game crafting. However, there are no exclusive crystal present in this biome, making it a unwise place to farm money, not the mention the tedious terrain. Trees are not as common than the grasslands, but definitely more common than in the desert.

This variation is similar to the Desert Mesa biome, the differences being that the ground around the terraces is a lot more rugged, the tops of the terraces are not as flat, more resources can be found here, and terraces can be found "stacked" on top of each other, while the plateaus in the desert do not.

This variation involves gradual to steep slopes that climb to jagged peaks. The slopes are stacked into broken graphite-like layers at varying levels that create some medium cliffs and gorges where they converge with other layers. 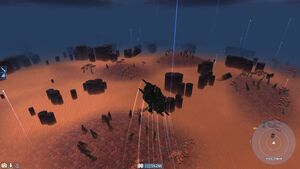 Resources are contained within black, rocky spikes which are located in the darker hill patches in very dense patches, along with many trees, but only contain Ignite, Celestite and Erudite (it always contains 1 of those), labeled as "crystal spires", which make is the best biome to farm money. However, These rocks do not reveal underground seams when destroyed, unlike other outcrops in their specific biome.

When the "i" key is pressed to view more information on the crystal spires, it says the following: "A dense spire of rock with a crystal seam. These are formed deep in the planet['s] core. What could have caused them to emerge on the surface?" possibly hinting at a future update to the biome. Some pillars are leaning over at an angle and the biome appears to use Mountain Trees (specifically Salami Trees), combined with a desert/mountain ground pattern.

Mysterious purple lights shoot into the sky in this biome. However, they don't do anything. These lights seem to originate from small flowers on the ground. These flowers cannot be interacted with at all, similar to the lights they produce. However, as of version 0.8.2, these lights are no longer found in the biome. However, these flowers still exist and seem to be glowing in the centre with an mysterious purple glow. No specific corporation spawns here yet, making it relatively safe to set up a base.

All in all, this biome can be a bit of a challenge due to the narrow passages and natural barriers created by the clumps of pillars, but the resources found here mean that exploring this biome is definitely worthwhile. It is also worth noting its rarity as the biome itself is usually small and seems to have a low chance of actually spawning and at that, far away from the initial spawn location as the reference image shows coordinates over 7000 and 10000m respectively, a tell-tale giveaway is the signature purple lights being shot into the sky (however, not as of version 0.8.2) and the darkening of the sky when within the biome. 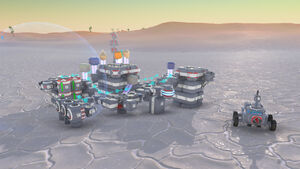 Salt Flats are large stretches of nearly flat ground. As such, these are the best places for speeding around and making bases.

Large, oddly shaped tall rocks containing resources can be found here. These rocks primarily give Carbite when mined, this can be seen with a blue shine particle emitting from the rock. Carbite, like Oleite, have an underground seam when the rock is broken, meaning it can be mined afterwards with an Auto Miner. Carbite is the best burnable fuel in the game.

There is a chance for a Carbite rock to merge with another resource rock, such as a Titanite rock, resulting in both Carbite and the other resource to appear, those still produce Carbite-only seams though.

Celestite crystals are exclusive to this biome, and are the 2nd most expensive mineral in the game. Overall, making this biome great as a fuel and money source. 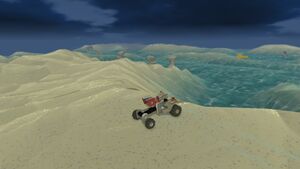 Added in version 0.7.5.2, this is the newest biome in the game (as of 1.3.10). The resources found here are similar to the Salt Flats. The ground also looks similar to the salt flats' texture but with a slightly bluer hue. As this is an ice biome, the ground is slippery here.

The terrain here is quite rugged and mountainous, with long jagged ridges running through the entire biome. It can be very difficult to traverse, and so it's not recommended for new players or techs that are not very good off-road to go here. Wheels such as the GeoCorp Krusher Wheel or the GeoCorp Jaws Wheel excel here with their extreme grip counteracting the slip of the ice.