Sumo Showdown is one of the various challenge modes you can play in TerraTech. In this mode, you create a fighter tech to go against 1 to 3 enemies in a sumo-style match. Currently, you can only battle against AI enemies, but multiplayer is to be added in the future.

How to Play[edit | edit source] 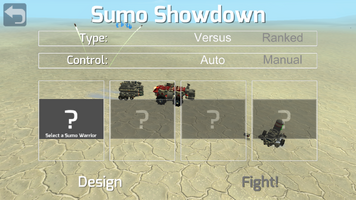 You can access the Sumo Showdown menu from the Challenges menu on the main menu. Here, you have different options for the challenge: 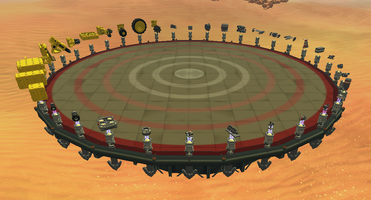 The Sumo arena has a diameter of about 60 blocks. During matches, the dispensers are removed.

To win the match, you must either knock the enemy out of the arena, or destroy their cab. 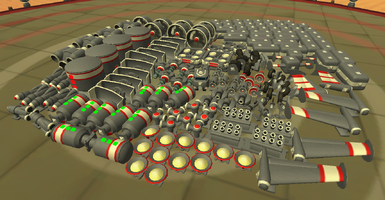 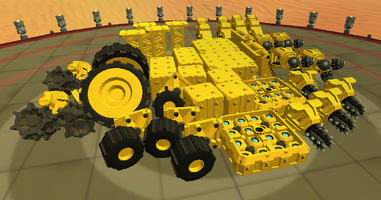 This type of tech aims to push the enemies off of the arena as quickly as possible. They tend to do this with the use of GeoCorp Two-Scoop Loaders and lots of boosters and fuel. The Loaders lift the fronts of the enemy techs, causing them to lose traction. Then the power of the boosters pushes the enemies off of the stage for victory.

These techs tend to aim low, and are usually very fast. However, they often have poor turning, which can be exploited by a dodging tech. They also have a lot of fuel inside of them, which can be disastrous for the tech if they explode. If built well, these techs can be good against Tanks, though they will fail if they can't push them off the stage. They can be easily countered by Matadors, as they will miss the tech and fly off of the stage.

This is more of a defensive type of tech, aiming to stay on the stage and survive in the long run. They are less concerned with pushing enemies off the stage and more with tearing them apart and destroying their cabs.

These techs use lots of traction and lots of weapons, and don't have that many boosters or fuel tanks. Due to their lower speed, these types of techs can be good against Matadors, but speed doesn't mean much if the tech can't turn, so make sure the tech is maneuverable if you build one. They can be weak to Pushers if they are strong enough, so make sure you have a lot of traction to withstand the force, and build low so they can't get under you. Tanks tend to be the best techs in most situations, as the other types tend to use gimmicks or ride on weak points. If you are fighting against one, you need to find their weak points and use them to your advantage.

These techs are designed to be a counter against Pushers, exploiting the AI's tendency to fly off of the edge. Their goal is to move out of the way and let enemies fly past them, and shoot to their rears if they manage to stay on.

These techs can be tricky to build, involving a lot of trial and error with boosters. In short, these techs use clever builds of sideways boosters and wheels to turn the tech around the arena to avoid getting hit by the enemies' weapons. They try to stay on the arena while doing this, and they often aren't perfect. Despite what might be your first thoughts, these techs can be easy to counter if you know what you are doing. First, don't be super fast and fly off the arena. Second, have good maneuverability so you can aim at the Matador tech. Third, shoot them, melee is pointless against them. Matadors are built very precisely, so blocks that get destroyed can kill their functionality. And since they use boosters and fuel to turn their techs, they can be crippled by exploding fuel tanks. And since these techs can fire at the rears of their enemies, it helps to protect any boosters or cabs that may be exposed behind your tech.

These rather uncommon techs are similar to Matadors in many ways. The difference is that, unlike Matadors, which slide out of the way on the ground, they jump into the air and go over the enemy tech. From here, they can attack the rears of their enemies, or dodge them to let enemies go off of the arena, similar to Matadors. These can also be built as a counter to Pushers.

These techs are even trickier to build than Matadors, since they have to jump and thus deal with a third axis of motion. Like Matadors, they use lots of boosters and propellers, and are also usually pretty light weight and small. Due to their fuel and size, these techs can be even more susceptible to explosions than Matadors. One advantage is that, if built well, they can be more effective than a Matador at dodging enemies, and can also be better for Tanks. However, due to their weaknesses and difficulty in building, they are not techs that many fighters would recommend.

Traction is a big part of a good Sumo tech. No amount of boosters or weapons is going to help you if you are going to slide out of the arena.

Traction can be a tricky thing to build into a tech, so there isn't any one solution to add. However, here are some things to keep in mind:

Testing your techs is hugely important in Sumo. There are a lot of random factors that go into Sumo matches, so a tech that wins once might not win again. And a tech that beats one tech might not beat the others.

If you have a tech or a set of techs that you want to defeat, you need to thoroughly test your tech against each of them many times. 10 is a good number of times to run the techs against each other, though more is better. Make sure you test your tech against each of your enemies, and to do it again after any edits you make to your tech. If you lose against one, change your tech to fix it, but make sure to test again to make sure that it works and that it doesn't negatively effect the results of the other enemies. The more you test, the more likely you are to win